Gibson presented under the title Understanding Data – Analysis, Not Archaeology. He highlighted the need to understand data if maximum value is to be extracted from it and described development of a data knowledge base at Royal Bank of Scotland. Avoiding the data inconsistencies of running numerous data silos and the difficulties of spaghetti-style application architecture, Gibson selected a meta data model for the data knowledge base, which was then filled with content. The development was not without challenges, such as mapping legacy data to the logical model and sustaining stamina throughout the build, but the outcome is a data management solution that meets business needs.

Panellists agreed that an enterprise approach to data management is essential in an increasingly regulated market that must report on both structured and unstructured data, manage internal risk and deliver agile solutions to demanding customers. Halfon commented: “If data can be made available without building a data warehouse, it is possible to be more agile and get to trading more quickly. Adding other types of information other than trade data, perhaps political data or news analysis, can deliver better returns.”

It is these types of business benefits that win C-suite buy-in for data management programmes, but the benefits cannot be delivered without technology innovation. Halfon noted an industry move towards logical data warehouses with data schema dictated by consumers rather than domain experts, as well as the emerging power of semantics in systems development. Brown, like Gibson, advocated the use of meta data models and described the criticality of data sequencing in the ‘forensic pathology’ of finding out how something has happened.

In terms of specific technologies, big data got a thumbs up from the US contingent in the conference room and a thumbs down from the Europeans. The panellists agreed that whether or not you like the term and despite having dealt with big data’s three Vs of volume, velocity and variety for many years, its elements still have a part to play in data management.

Gutkind explained: “We see people wanting to do analysis on data as it flies, so velocity is important. It is not just about putting data into a system for analysis, but analysing it as it goes in.” This is the role of in-memory processing, a technology that is gaining ground, but needs to be part of a wider velocity and volume solution that could also encompass solid state local drives and cloud storage.

On variety, Halfon said: “Variety is where the challenge and opportunity lies. If all data can be brought together in a way that has not been done before, it is possible to manage risk and regulation, and deliver revenue and returns.” He cited tools such as Hadoop and MarkLogic’s NoSQL and search capability as a means of managing and benefitting from big data.

Although cloud computing is some years down the development road, the panellists voted in its favour. Gibson acknowledged its elasticity to deal with data spikes, while Brown suggested it can support better data management as the location of data and where it is moving to and from can be tracked. He also proposed clouds including models of system topology and simulations to discover where data is best placed. 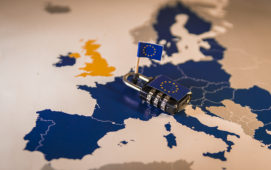 Recorded Webinar: The impact of GDPR on data monetisation

You can listen to the recording of this webinar by registering on this page. Data monetisation has become key to revenue growth at financial institutions, but how can they get it right and achieve competitive advantage, and how will General Data Protection Regulation (GDPR) impact their progress? This webinar will discuss why and how financial...

END_OF_DOCUMENT_TOKEN_TO_BE_REPLACED

GoldenSource is planning to innovate its enterprise data management (EDM) and master data management (MDM) solutions, and accelerate global growth following its acquisition by Gemspring Capital. Product innovation will include building and buying adjacent solutions to the EDM platform. GoldenSource CEO John Eley, describes the acquisition as a strategic investment in the company’s growth. He...