Tibco Releases FTL – Aims to “Dominate” in the Front Office

With the release of its low-latency FTL messaging product, Tibco Software aims to “dominate in the front office,” a space where it got started in the mid 1980s and then became ubiquitous with its TIB and Rendezvous offerings. Having since diversified into the non-financial markets with a number of enterprise information products, the company is now emphatically returning to its roots.

The result of a “strategic collaboration” with Intel, FTL was previewed at its Tucon user conference in May 2010, and leverages contemporary technologies, including multi-core processors, shared memory, InfiniBand and 10 Gigabit Ethernet.

[Note: Tibco’s CTO for Financial Services, Spencer Greene, will be discussing these and other technologies at A-Team events in London and New York City in April.]

Tibco executives claim that FTL – which informally stands for ‘Faster Than Light’ – beats the latency of competitive messaging products by 42%, with shared memory communications of 384 nanoseconds, and server-to-server messaging as low as 3.1 microseconds. The company is not naming its competitors, or publishing comparative benchmarks, but it is clearly taking aim at products from IBM, Informatica, NYSE Technologies, Solace Systems, among others.

The FTL launch activity is “Not just about the numbers,” says Rajeev Kozhikkattuthodi, product marketing manager for messaging at Tibco. Rather, it is looking to make a statement that “Tibco is back in the extreme low-latency messaging business, and we’re back here to dominate.” Today’s release is a “1.0” product, he says, which will be further developed over several years, with the next major release already being planned.

For its launch, Tibco is working with Arista Networks, Dell and Mellanox as marketing partners for what it refers to as its “Extreme Low-Latency Messaging Solution.” Audited benchmarks from STAC for this combination are expected shortly.

Kozhikkattuthodi says FTL is already installed in some two dozen beta sites, in major financial centres, including London, Paris, New York City and Chicago. And the company already has customer contracts with a buy side firm in London, and a major investment bank in North America.

FTL will be targeted in part at Tibco’s existing – and extensive – customer base for Rendezvous, with which it offers ready integration. Whereas Rendezvous is generally deployed to deliver real-time market data across trading rooms, FTL will be directed at applications such as algorithmic and high speed trading, and market centre matching systems, where latency requirements are far more stringent.

While Kozhikkattuthodi declines to discuss specific pricing, he says that FTL will be offered using an “application-based” model, as opposed to per-server or per-core pricing. Where FTL is installed in a Rendezvous environment, that means paying for just the applications that make use of it. Pricing will be keen, he suggests, adding that Tibco “does not intend to lose a deal for want of competitive pricing.”

Apart from its increased performance, FTL also employs content-based addressing, where applications can filter messages based on the value of data fields within messages, with meta data used to describe those fields for applications. This functionality – available via C, Java and .Net APIs – marks a departure from Rendezvous, which is designed around the subject-based addressing that Tibco has embraced since its early days.

Also unlike Rendezvous, which is based solely on a proprietary multicast transport protocol, FTL also supports TCP, shared memory and Remote Direct Memory Access (via InfiniBand and 10gE). Transports, message definitions and data distribution paths are managed centrally for ease of deployment and management.

With FTL, Tibco is addressing a market opportunity that is worth several hundred million dollars annually. Kozhikkattuthodi says that the company’s global scale and its ability to design overall solutions – as well as having “messaging in its DNA” – will give it an advantage over its competitors.

Meanwhile, those competitors are likely to continue to develop their offerings to reduce latency and increase functionality. As in other aspects of low-latency architectures, the often cited ‘Low-Latency Arms Race’ is set to continue in messaging.

END_OF_DOCUMENT_TOKEN_TO_BE_REPLACED 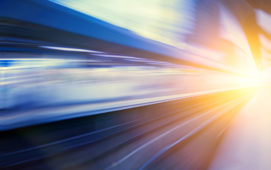