LEI Adoption Will Raise Standards, Governance & Transparency, says Webinar Panel – Even if It Isn’t Obvious Yet

The turmoil and confusion caused by the adoption of Legal Entity Identifiers (LEI’s) for EMIR reporting last month will be worth it in the end, was the overriding conclusion of our expert webinar panel last week, who expect to eventually see meaningful improvements to industry standards, governance and transparency as a result.

The panel comprising Thomson Reuters’ Tim Lind, Bloomberg’s Peter Warms and Alacra’s Steve Goldstein, acknowledged that the implementation of LEI adoption, effectively formalised in Europe as the EMIR regulations went “live” in February, could have been handled better. In fact, the group agreed that implementation had probably been done the wrong way around.

Although LEI’s have been gradually introduced for nearly a year now, the EMIR requirement has focused industry minds. Many feel the LEI should have been preceded by the establishment of a standard data format that would be used by issuing pre-LOU’s (Local Operating Units) and would have prevented much of the uncertainty and duplication that has now occurred.

In fact, this process would have been further strengthened had the ultimate managing agency, The COU (Central Operating Unit), been there to weigh in from the start with a standard data format. But, while there are is long list of things many feel a COU could have done to make the system run more smoothly, the industry has to come to terms with what has evolved.

For the record, the Legal Entity Regulatory Oversight Committee (LEIROC) has so far approved the accreditation of national LOU’s in 13 countries to enable the issuance and management of LEI’s. However, the planned hub of the structure, the COU, is still in the process of formation. Although it is known it will eventually reside and operate out of Switzerland.

Yet, despite these flaws and teething problems and the fact that the market is still a long way from harmony, the panel agreed that the development of LEI’s is a major step in the right direction.

Interest has risen rapidly said Lind, “Funds and legal entities are registering in their droves, with a realisation that LEI’s are not the end-game, but just a small piece in what will produce significant improvement in transparency and disclosure.”

But, while many of the big industry players, particularly the Tier 1 sell-side enterprises, were reasonably proactive and prepared, said Goldstein, he noted that “many of the smaller firms have done the bare minimum and are barely able to comply.”

He said all firms should adopt a long-term perspective. “Do what you need to now, but if this is going to be a success you also need to look at what is going to be required in the future and how it could eventually integrate with transaction and risk data to enable the bank to prepare properly.”

Warms suggested that a better understanding of the long-term implications and potential benefits from the integration of LEI’s with other information can be a tremendous selling point to management to get these projects underway. “We might take a while to see this come to fruition, but we do need to do this,” should the internal message, he added.

All three of our panellists contributed to a detailed analysis of both the current circumstances around LEI adoption and the longer-term objectives which can be found in this accompanying special report.

The panel acknowledged that confusion within firms required to implement the LEI obligations often appeared to stem from an inability to identify individuals with responsibility for the task. Goldstein said, “It certainly varies by firm, as we have talked to a wide variety of job titles for whom LEI’s should be important. In an ideal world it should be the CDO. But it is important to recognise that, while it seen as mainly a back office phenomena, it will have much wider implications.”

Lind concurred, noting that “The underlying intent is to publish data to ensure governance and consistency.” But he added banks must have the technical ability to balance disclosure with prudentiality, posing the question “Do you want regulators to be able to look at the same things your risk teams might be looking at?”

The panel also touched on the subject of potential outside support for banks to simplify the management and delivery of LEI data which could remove even more duplication, such as by a Utility model. But Goldstein felt that this was a little premature. “We are a long way off from a Utility. We probably need to get to a critical mass in excess of a million LEI’s (there are currently about 230,000) where a third party provider could be useful.” He also noted that had LOU’s and a COU been in place from the start it would have been easier to establish hierarchies and move more quickly towards a shared service model.

These requirements come at a time when institutions are being bombarded from many angles by new regulatory demands, including the likes of FATCA, Dodd-Frank and MiFID and others. Warms said that “Ideally banks would have been able to take a holistic view of all of these together, understand the commonality and produce a strategic roadmap.”

Unfortunately we know that the reality is very different and banks have been mostly left to deliver multi-faceted tactical responses to each new initiative. But the message from our panel of experts was clear. The long-term benefits of greater transparency and governance that will result from LEI’s and other supporting initiatives will be clearly evident and any efforts that incorporate a strategic plan to tackle them will almost certainly deliver benefits. It’s just that right now nobody is sure exactly when that might be.

END_OF_DOCUMENT_TOKEN_TO_BE_REPLACED 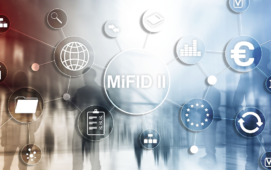 SmartStream Technologies, the financial Reference Data Utility (RDU) solutions provider, has added derivatives to its Systematic Internaliser (SI) Registry service, to help clients meet the rapidly approaching MiFID II deadline of 15 September, 2020. The new service will allow trading counterparties to identify who is responsible for reporting trades in general, but also supports them through one of the most...