The Office of Financial Research represents a “game of chicken” between the regulatory community and the industry, said PJ Di Giammarino, CEO of think tank JWG, at this week’s event on the regulatory data radar in 2011. “If you don’t provide feedback and get your act together by 15 July deadline, it could get pretty ugly,” he warned attendees to the JWG event. He also highlighted the potential cost of the new regulatory agency for individual financial institutions, indicating that firms such as Bank of America could be facing an annual tax bill of US$81.2 million to support the new agency from 2012 onwards.

The JWG figures are based on the government estimates that it will cost US$500 million per annum to operate the Office of Financial Research, which will initially be publically funded but from 2012 will be supported by a tax on systemically important banks. Hence firms such as JPMorgan with total assets of US$2.14 billion could face a bill of US$74.3 million, Citi could be forced to pay up US$68.8 million and Goldman Sachs could be taxed US$31.5 million.

Moreover, Di Giammarino noted that much of the data could create an additional reporting burden (as noted recently in the Cluff Fund report), which could result in further cost to these financial institutions. “Getting it right could lead to significant cost reduction, but getting it wrong could lead to increased buffers and fines,” he warned. “Also consider the fact that other countries could follow the same model and the costs could spiral out of control.”

He has also recently noted that the legal entity policy proposed by the Office of Financial Research in the Federal Register last month was “snuck through the day before Thanksgiving”. The think tank has therefore raised a number of issues that could have a large impact on the efficiency and effectiveness of firms’ operating models, including whether or not the identifier chosen is fit for purpose.

Di Giammarino elaborated: “Is the minimum information set indicated appropriate and/or sufficient? What are the extraterritorial implications of this US regulation? What are the implications for EMEA and Asian operations? Will existing regulations be updated to comply with the new standards? Will new ones be rewritten? What operating model/performance criteria are being suggested? How will this be governed and what role will the industry have in it? What is the ‘consensus process’? How will suppliers be selected? How will global firms respond and will they continue to engage with US regulators?” All good questions and ones that the industry must endeavour to have answered if it hopes to shape the development of the new agency.

As well as meeting the data requirements of new bodies such as the Office of Financial Research, a more general “tipping point” for regulatory driven back office change is on the cards for next year, Di Giammarino told attendees to the JWG event. “The race is on to prepare for the onslaught of regulatory change and be the first to market with your message to establish credibility with your clients,” he contended. “The industry has only just begun to mobilise but tight political deadlines will help catalyse a tipping point in 2011.”

Di Giammarino highlighted a number of regulatory changes that JWG has flagged as important to tackle on its radar, including Basel III, market structure changes, the development of trade repositories and living wills regulations, to name just a few.

The environment will be even more challenging due to the fact the regulatory framework will also be in a state of flux as a result of the development of a new power structure, including new regulatory bodies such as the Office of Financial Research in the US and the European Systemic Risk Board (ESRB). This will result in a degree of economic uncertainty that will put pressure on costs at a time when investment in key back office processes including data management is required.

Di Giammarino suggested that the “tried and true” strategy of meeting regulatory requirements by doing the minimum required, in a box ticking fashion, is on its way out. Firms will need to take a more holistic approach to data if they hope to be able to meet the wide range of reporting requirements that are incoming as a result of the regulatory tsunami, he said.

However, one of the prerequisites to surviving the tsunami will be in prioritising the “known unknowns” in terms of how they will impact a firm’s business and taking appropriate action. “You need to determine what matters most to your business, the regulators and your clients,” he warned. “Then you will need to prove to your CFO that you deserve the funding for these projects by demonstrating results incrementally.”

Di Giammarino indicated that the scope of change is “massive” and highlighted that JWG’s own Customer Data Management Group (CDMG) is monitoring more than 40 different regulatory initiatives that will impact the area of customer data alone. Collaboration such as the work going on within the CDMG will therefore be important to foster collaboration across firms and develop a dialogue about the important issues coming out of the wall of regulatory data requirements. “Use your industry associations to help foster a better regulatory dialogue,” he urged. “Align with the herd and help to set the 2012 standards.”

Winning strategies for tackling the challenges are around establishing incentives, assigning ownership (a common theme with regards to data governance that crops up again and again in the data management industry), increasing transparency to senior management, defining a target operating model and setting cost targets, elaborated Di Giammarino. “These will produce results that justify further investment,” he added.

END_OF_DOCUMENT_TOKEN_TO_BE_REPLACED 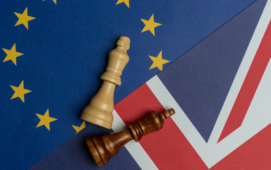