In a white paper recently published by DTCC’s Fixed Income Clearing Corporation (FICC) subsidiary, the vendor indicates that netting all to be announced MBS trades daily and then having FICC step in as the counterparty to each net position would reduce costs and risk. Murray Pozmanter, DTCC managing director of clearance and settlement and fixed income, explains: “The idea is to streamline the somewhat complex current ‘balance order’ netting process.”

He continues: “The industry’s process today requires trading firms to allocate pools of mortgages against the TBA obligations we establish, and then to settle all those pools with multiple counterparties at different prices. What we’re recommending – netting trades daily and then having FICC step in as the allocation and settlement counterparty – would sharply lower operational risks and expenses for the industry.”

FICC clears trades of MBS issued in the secondary market by government agencies or government sponsored enterprises such as Fannie Mae and Freddie Mac. Under current market practices, MBS trades are netted only once a month, beginning 72 hours prior to the monthly settlement date established for each particular kind of TBA security. As a result, trading firms must submit their TBA trade activity prior to the netting cut off on the associated “72 hour day”. DTCC claims this practice can sharply limit the number of trades incorporated in the current netting process.

If FICC becomes the central counterparty to all TBA obligations on a daily basis, the white paper says, it will then be the contra side to all the allocations, allowing for a substantial reduction in the number of allocations that must be performed, as well as the associated securities deliveries that need to be made.

“Eliminating the 72 hour cut off will let us wring far more costs and risk from the process as more trades are included in netting,” says Pozmanter. “This, in turn, will let us reduce the number of settlements stemming from TBA trading and that will help to stabilise the operation of the market, especially during periods of market uncertainty. Since all obligations will settle versus FICC as the central counterparty, the whole notification of settlement (NOS) process can be retired.”

In addition, the white paper states, with the revised netting procedures in place, FICC may be able to introduce blind brokering and comparison only services.

“In the course of introducing a general central counterparty protection later this year, we wanted to re-examine the entire trade clearing and settlement process from a risk perspective,” explains Pozmanter. “After all, this is a far different world from 30 years ago, and we need to streamline the process and reduce the window of risk as much as we can for our member companies. Achieving this goal will require their support. We hope the white paper will help us foster a dialogue within the industry and a consensus for moving forward.”

Once the industry has reached agreement about the proposal, FICC says it will submit the plan to the Securities and Exchange Commission (SEC) for review and approval.

END_OF_DOCUMENT_TOKEN_TO_BE_REPLACED 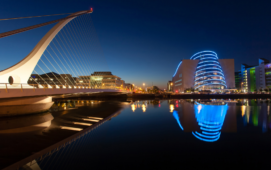