The Talk of TSAM

There’s nothing like a good bit of gossip and industry conference floors are often a hotbed of such activity; this year’s TSAM was a case in point. The talk of the show floor within the back office buy side community, much the same as last year’s FIMA, was legal entity identification, including Swift’s decision to back off from pushing the Bank Identifier Code (BIC), Bloomberg’s open symbology initiative and rumoured vendor M&A activity.

The beginning of this year has obviously been dominated by discussions about legal entity and instrument identification in light of the US Office of Financial Research’s (OFR) aggressive deadlines for change (you can read up on the developments thus far in my numerous blogs on the subject over the last few months). After all, if a final decision is to be made by July on a legal entity ID standard, then the industry has to provide feedback ASAP. Unsurprisingly then, this topic was hot at TSAM – there was a panel discussion on the subject and a number of presentations, but by far the most interesting conversations took place on the show floor.

Aside from discussions about how the deadline will certainly be pushed back, the talk centred largely on which legal entity identifier might be chosen now that Swift has backed off from, well, backing the BIC. Its decision to back a new ISO standard rather than reworking its own BIC code marks a significant change in direction for the network operator and one that took many by surprise. As I noted towards the end of last year, Swift’s exec were due to take a vote in December on whether to push the BIC this year or to go down a different track, and this decision is obviously representative of that vote and negotiations with its potential utility partner, the Depository Trust & Clearing Corporation (DTCC).

It also reflects the majority vote in the feedback to the OFR for an ISO-based standard: 11 out of the 30 separate responses called for the standard to be developed by ISO; the highest number of votes by far for any standard. There have also been a number of concerns raised about the appropriateness of developing the BIC as a legal entity identifier over the last year or so, largely as a result of its current structure. Its function as a bank identifier within the framework of the messages carried across the Swift network was cited as a potential problem by a number of industry participants, as well as the embedding of country codes within its structure when the intention is seemingly to have a ‘dummy’ identifier with no embedded logic.

The decision to move forward with another ISO-based standard, then, is logical. You’ll also notice that in our recent interview with Swift’s Fabian Vandenreydt, who was recently promoted to head of Securities and Treasury Markets and is charged with leading the network operator’s reference data initiative, he makes no direct reference to the BIC. Instead, he states the new Swift line: “It is important that regulators consult the industry on this issue so that whichever solution is adopted has wide support. It is to be expected that international, open standards developed for the industry in partnership with the industry mainly through key industry associations will prove to be the most appropriate solution.”

Turning to instrument identification for a second, Bloomberg’s open symbology was also a big discussion topic at the event. Asset managers in attendance seemed to be quite positive of the decision by the vendor to offer the new Bloomberg Global ID (BBGID) for free and many references were made to its competition about whether they might take similar steps. During the OFR panel discussion, a representative from Bloomberg itself stood up to confirm that the BBGID would be freely available “in perpetuity” and will be able to be mapped to other standards, including Bloomberg’s other IDs.

The 18 field code is currently being provided at an exchange level for securities and, by the end of the year, firms will be able to request BBGIDs for OTC derivatives. You read it here first! The Bloomberg representative also indicated the vendor is open to talking to competitors about OFR developments. This is no surprise, given that the vendor provided a response to the OFR along these lines at the end of January. As for the other rumours circulating the floor, some noted the low profile that Avox’s main competitor CounterpartyLink has maintained over the last year. One person noted that it could be ripe for acquisition, by the right vendor, of course. On the subject of M&A activity, Netik is also rumoured to be in the acquisition process at the moment (it’s acquiring an, as yet, unidentified smaller vendor) – watch this space for news… 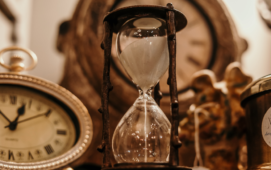 Recorded Webinar: Last minute preparations for SFTR: What still needs to be done and are we ready?

The regulation clock is ticking. Financial firms, especially those subject to Phase I of implementation, are well aware of the impending April 2020 deadline for the Securities Financing Transactions Regulation. The question is, are they ready? Tactical, i.e painful, approaches to compliance won’t be good enough. A strategic plan of attack is necessary to combat...