News that the Depository Trust & Clearing Corp. plans to build a central repository for holding so-called golden copies of trade details for the OTC derivatives marketplace – and in particular for credit derivatives – will be welcomed by industry participants.

Certainly, the credit derivatives marketplace has been crying out for help in getting its operational house in order. Such is the situation that the U.S. Federal Reserve has on several occasions called in the market’s major bank players to express its dismay and concern over the unacceptably high rate of settlement failures for credit derivatives trades.

Meanwhile, European players in particular will be encouraged by the DTCC’s willingness to step up. Lacking a central facility that acts like the DTCC does for the U.S. marketplace, European market participants worry about how they will meet the requirements of the forthcoming MiFID regulation, particularly as it strives to create a level playing field as far as transaction costs are concerned.

Finally, the addition of the DTCC credit derivatives repository – and plans to extend to other markets – will provide some much-needed relief for credit markets players for whom access to reliable descriptive information relating to many aspects of their activities continues to rely on a multitude of overlapping suppliers, with no standard approach in sight.

The DTCC’s central industry trade information warehouse and support infrastructure has the aim of automating and centralizing ‘downstream’ processing over the life of an over-the-counter (OTC) derivatives contract. According to DTCC, “the solution will consist of a central trade information warehouse for credit derivatives – essentially a comprehensive database containing the ‘golden copy’ of each trade – and a central support infrastructure that standardizes and automates ‘downstream’ processes throughout the life of each contract.”

The first release of the repository is scheduled for mid-year. Within that release, the DTCC aims to offer ‘downstream’ processing support offering the ‘current state’ of each contract (after taking into account full and partial assignments, terminations, and so on), as well as calculating and bilaterally netting the cash flows associated with each contract. Further releases, anticipated for later this year, will add extensions covering other OTC derivatives. DTCC has been working closely with 11 leading global dealers to develop the overall concept and detailed design to deliver this industry infrastructure solution. The DTCC already operates a centralized trade confirmation environment for OTC derivatives, based on its Deriv/SERV platform, that brings together both dealers and buy-side institutions. The trade data repository project, to be overseen by a Senior Operations Group set up by the DTCC’s OTC Derivatives Operations and Planning Committee, is being designed to eventually accommodate other OTC derivatives, including rates, equities, foreign exchange and commodities derivatives.

END_OF_DOCUMENT_TOKEN_TO_BE_REPLACED 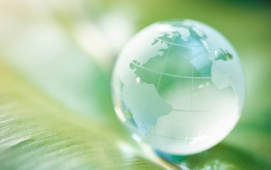 One of the chief challenges to successful deployment of ESG data by financial institutions is putting that information into context; it’s almost an unwritten maxim that sustainability data is useless if it can’t be used in conjunction with other data. Often the difficulty is one of matching ESG data and metrics to the entities with...