Another One Out the Door at Thomson Reuters: Wenig Departs from Markets Division as Part of Structural Shake up

In yet another shock departure from data giant Thomson Reuters over the last few months, Markets division chief Devin Wenig has left and CEO Tom Glocer is due to take on his responsibilities. Wenig, who has long been thought the natural successor to Glocer, is departing the vendor as part of a management and structural shake up that will see Thomson Reuters divide the Markets division into two operational units.

According to Glocer, this restructuring is to accelerate growth by streamlining the three operational units under the Markets division into two: a combined sales and trading and investment and advisory business; and the Enterprise business (which, for now at least, has not been restructured). Glocer also used the deadly word “synergies” in his justification of the move, which may reflect some degree of dissatisfaction at the top with the division’s lacklustre performance since the launch of its various platforms (Enterprise, Eikon and Elektron).

The departure of Wenig is something of a surprise, given that he has been heavily involved in the strategic integration of Thomson Financial and Reuters and has long been considered Glocer’s right hand man. Back in 2009, for example, both Glocer and Wenig cashed in 300,000 shares to raise around £6 million between them in order to “rebalance” their shares. However, at the time, it was rumoured that the move was to guard against the earnings dip that faced the vendor during the post-crisis market turmoil.

As for the future, perhaps the responsibilities will be handed from Glocer to recently appointed Sales and Trading head Shanker Ramamurthy or Investment and Advisory head Eric Frank…?

END_OF_DOCUMENT_TOKEN_TO_BE_REPLACED 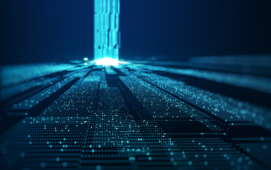