Established in 1983, Advent Software is one of the old guard of investment management solution providers, but it has kept pace with the market and is expected to develop further following its acquisition by SS&C Technologies, which completed in July 2015. Together, the companies are creating a strategic plan for growth including extended cloud-based services, cross-selling and a push into regional markets outside the US.

Advent was founded by Stephanie DiMarco, an operations manager in a small investment house. She used mainframe tools to support operations, but soon decided better tools could be built on a PC. Working with another technologist she developed PC-based portfolio management software and set up Advent Software in 1983, taking the role of founder and CEO. 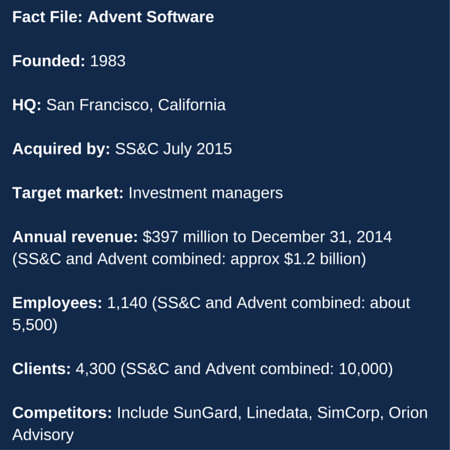 The company was initially US-focused and worked with the lower end of the asset management market. Over the next 10 years, it extended its offerings and by the time today’s CEO, Pete Hess, signed up in 1994 it had more than 1,500 customers and revenue of about $25 million. The company went public in 1995 and 21 years later, DiMarco is chair of the Advent board of directors and Hess is leading the company with a product portfolio including trading, order management, compliance, custodial and market data management applications, a geographic reach across the US, Canada, Europe, the Middle East, Asia Pacific and South America, and revenue of $400 million.

Hess explains: “We have stuck to what we do best and in the past few years have updated our investment management solutions and developed cloud delivery capability, mobile application access and a social community that allows clients to work with each other online. Over time, we have had to keep pace with PC, SQL Server and Internet technologies, and we have had to invest and develop products for an increasingly sophisticated and demanding market. We have also had to accommodate regulatory change.

“The biggest trend we see now is outsourcing data management and operations. We have 4,300 clients and host period end reporting for about 1,000 in the US advisory market. It is a different challenge to support intra-day reporting for active money managers, but we now intend to do that.”

This and other developments are part of the growth strategy that is being put in place following SS&C’s acquisition of Advent. The match was not difficult: Bill Stone set up SS&C and took the role of CEO and chairman in the mid-1980s, initially providing portfolio management software to the insurance market, but soon following a parallel path to Advent in the financial services sector. SS&C became Advent’s largest customer when it bought fund administrator GlobeOp in 2012.

Always on the look-out for new acquisitions, Stone announced a definitive agreement to acquire Advent for a cash sum of $2.63 billion in February 2015 and closed the deal last month. The acquisition would strengthen SS&C’s portfolio of investment management solutions with Advent applications including trading, order management and compliance. It would also provide opportunities to cross-sell SS&C’s fund administration and hosting services to Advent clients, and allow the company to work towards becoming a single vendor of hosting solutions for investment managers that must match the increasing sophistication and complexity of the market at a time when fees are under pressure.

One simple example of cross selling are the GO Apps tools built by GlobeOp around Geneva, the Advent performance reporting software used by the fund administrator. These tools, suggests Hess, could be productised and sold to Advent’s Geneva users. On a wider scale, the companies plan to continue to support all their products – including a total of 16 accounting systems – investing in some to ensure their clients keep pace with technology and regulation, and in others with a view to driving them forward.

Product integration is high on the agenda, initially on a point-to-point basis, but later through the use of Advent Direct, a cloud platform that is in beta test and should be on sale later this year offering integration of content from the companies’ different systems. The platform will initially support Advent’s Portfolio Exchange asset management solution, then Axys, its turnkey portfolio management and reporting system, and the Geneva performance reporting software.

Hess suggests it will take about 18 months to plug all Advent and SS&C applications into the platform, and says: “This is an important part of the growth strategy and a compelling value proposition as we will be able to provide pretty much everything an investment manager needs and deliver the technology or host and run it.”

Looking at the companies’ geographic footprint, Advent will add strength in the Nordics and Middle East to shared territories across the US, Canada, Europe and Asia-Pacific and is looking to lean on SS&C’s international client base to increase international business from 20% to nearer 40% or 50%. With revenue growth at the heart of SS&C’s acquisition of Advent, job cuts have been minimal with less than 5% of Advent’s 1,200 jobs being lost, although a number of members of the senior leadership team with careers of over 10 years at the company used the acquisition as an opportunity to step down and make way for internal promotion.

SS&C paid a premium for Advent, no doubt with good reason, and has been quick to put a growth strategy in place, but looking at Stone’s acquisition record Advent is unlikely to be the last in for long. As Hess concludes: “Every time something comes up for sale Bill [Stone] wants to know about it, so we will see what happens further down the road.”

END_OF_DOCUMENT_TOKEN_TO_BE_REPLACED

The European Securities and Markets Authority (ESMA) has proposed targeted amendments to some of its Regulatory Technical Standards, essentially RTS 1 and RTS 2, which specify Markets in Financial Instruments Regulation (MiFIR) transparency requirements for equity and non-equity. The amendments aim to clarify, improve and simplify the transparency regime for equity and non-equity instruments. The...