This Year’s Sifma One of the Best

I realise that might be a contrarian view. Speaking to many at last week’s show – The Sifma Technology Management conference & Exhibit is its full name – the main topic of conversation was how small it was, how empty it was. One veteran reckoned it reminded him of when it was hosted at the Americana Hotel in the ’70s, before my time. But I still didn’t have time to get to see all the exhibitors that I wanted to, I reckoned the foot traffic was decent, and the overall quality – both exhibitors and delegates – was good. No complaints here, other than the resulting exhaustion from attending all three days.

True, if I were the organisers, I’d be feeling a bit depressed with the number of exhibitors down by 40% or more, and conference registrants down too, despite some significant discounting. The top floor of the show was abandoned, and much of the second floor space was empty or pressed into service as an alternative conference.

The loss of some brand names – Thomson Reuters, SunGard, Microsoft, HP – was also a blow to the reputation of the event. A real question is whether the downward hit was a sign of this year’s unprecedented times, or a trend. Both Thomson Reuters and SunGard ran single-day off-site events alongside the show, and they’ll no doubt be assessing whether doing that was better ROI compared to taking a big booth on the show floor.

For my part, I never made it to either of those events, whereas I would certainly have stopped by their booths at the show. And I have to say it was sad to walk in on Tuesday and not see George Levine in his traditional place – on the Quotron (err, Reuters, err Thomson Reuters) booth.

An unscientific poll of exhibitors conducted by myself and my A-Team colleagues resulted in some consistent feedback: that the quality of delegates was good and that, compared to previous years, more meaningful conversations were taking place, fuelling justifiable hope that firms are looking to spend again. Truth be told, delegate quality has always been an issue for the exhibitors, but this year it was much less so.

At the A-Team booth, we met with some good people and I suspect business will result. And that’s what the show should be about. One upward trend at the show was the number of companies offering co-location, proximity, connectivity and interconnection services. Stay tuned for a deeper dive on that. And see you at the show next year, June 22 to 24, 2010.

END_OF_DOCUMENT_TOKEN_TO_BE_REPLACED 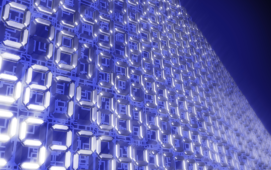 Machine learning has become essential to financial institutions seeking timely business insight and signals of opportunity and risk across the business. At many firms, the technology is being scaled and use cases are proliferating. There are limitations, however, with useful outcomes from machine learning models depending on high quality data that is annotated accurately and...