David Craig isn’t an actor who plays James Bond (that’s Daniel Craig). Nor, for that matter, is he a soul singer from Southampton (that’s Craig David).

A year or so on from that reorganisation, Craig’s message to the market is clear: Thomson Reuters has conquered the historical complexity of its product line-up and settled on a single platform approach for users across the board. This of course harks back to the days when Wenig’s old boss, Tom Glocer, took the reins of the combined entity and pledged to simplify, simplify, simplify.

Then the goal was 50 products. Craig is talking about a single platform – Elektron — albeit with multiple points of entry and Eikon, its flagship financial markets desktop, being one of them.

Craig is stressing a single world view in terms of data model and consistency of data. “We’ve blown through the concept of having separate worlds for delivery of our data,” he says. From here on in, all customers – irrespective of their chosen access vehicle – will get the same content sets.

That’s the vision, and Craig concedes there is some way to go. But 2013 initiatives are geared toward that lofty goal in response to a shift the company is seeing in the market to a cloud-based, managed services delivery model, with – Craig stresses – the security and reliability that our unforgiving marketplace demands.

So, expect to see a comingling of capabilities, all distributed via the Elektron platform. Craig cites the recent addition of the World-Check data to Elektron and the successful integration of TradeWeb fixed income multi-dealer platform into Eikon, and points to impending moves to integrate more reference and LEI data on to the Elektron platform.

Indeed, Eikon and Elektron are options open to sales teams as they sell into specific client segments as categorised by the new business lines. What the client gets will be consistent between user interface (Eikon) and data and trading platform (Elektron), Craig says.

He is keen to stress Thomson Reuters’ open systems pedigree. “We opened up our API 25 years ago,” he says, referring to the Reuters Foundation Architecture (RFA) that underpinned the Triarch digital market data platform, later known as the Reuters Market Data System (RMDS) and later still as the Enterprise Platform for Real-Time.

In a sign that Thomson Reuters may have undersold itself with respect to its developer programme, Craig points out that the company currently supports some 900 software development and content partners; he doesn’t mention the hundreds perhaps thousands of contributors of market data to the Thomson Reuters network. He does point out, though, that Eikon will continue in the platform tradition by offering access to third-party and client data, as required by customer demand.

The adoption of this new platform approach points to a desire to reduce the footprint at the client site. With both Eikon and Elektron, the client-side equipment requirement is minimised, a development that perhaps goes some way to explaining the decisions both to offload the Kondor suite of trade and risk management solutions and to abandon the Enterprise Platform for Data Management EDM platform.

But cloud has another key benefit, says Craig: resiliency. “[Hurricane] Sandy taught [the industry] that situating resiliency 10 miles away is flawed as a contingency strategy,” he says. “Infrastructures that performed well during the storm had 24/7 cloud environments. Elektron and Eikon had almost no issues. Sandy was a moment of truth for our industry.”

And so in 2013, clients can expect to see more of a shift to the single-platform, managed services concept. “Older infrastructure will be discontinued, but we won’t be making people move too fast and customers can still opt for deployed solutions according to their needs,” Craig says. “It will be progressive, no Big Bang. It will be done smartly, area by area and in partnership with our customers.”

This an ongoing journey, and to ensure client priorities are properly identified, Craig says Thomson Reuters is engaging with customers, and soliciting their input through the use of customer advisory boards and other mechanisms.

Craig has already shaken things up. It remains to be seen whether Thomson Reuters’ clients will be suitably stirred. 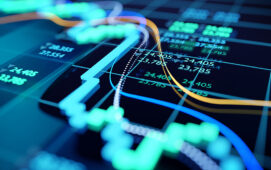 Institutional investors, investment banks, exchanges and service providers are accelerating their preparations to embrace the burgeoning marketplace for digital assets. Market participants are vying for position in the new digital assets ecosystem, hoping to emerge as the dominant gateway into the new market’s infrastructure. This webinar looks at the characteristics of the emerging institutional market...

END_OF_DOCUMENT_TOKEN_TO_BE_REPLACED

GoldenSource is planning to innovate its enterprise data management (EDM) and master data management (MDM) solutions, and accelerate global growth following its acquisition by Gemspring Capital. Product innovation will include building and buying adjacent solutions to the EDM platform. GoldenSource CEO John Eley, describes the acquisition as a strategic investment in the company’s growth. He...