BoNY/Mellon Merger Brings Rivals Eagle and Netik Under One Roof

Neither bank is prepared (or ready) to comment yet on what the combined Bank of New York Mellon Corp. will do with these overlapping assets going forward, and indeed it is very early days – the transaction will not complete until the third quarter of next year. However, it seems likely that in the name of efficiency some streamlining of the new bank’s data warehousing capabilities will occur. Whether this will involve the bank divesting itself of one of the vendors, or merging the two companies’ management and technologies, remains to be seen. Whether the fact that Bank of New York is the dominant partner in the “merger” will prove to be significant will also only become apparent over time.

Bank of New York acquired a 51 per cent stake in Netik in 2004 (buying out Warburg Pincus and reducing the holding of Advent Venture Partners in the business). This was an echo of Mellon’s acquisition in 2001 of Eagle, which now operates as a separate unit within Mellon Global Securities Services.

Both banks said a key driver for their investments was to use the data platform providers to support their investment operations outsourcing businesses. Bank of New York was already a Netik customer, and at the time the deal was announced, Netik said the bank’s intention was to roll out its data warehouse with additional investment management functionality (such as performance modules) throughout its operations (Reference Data Review, July 2004). Netik maintained from the outset that it would continue to sell to both clients of other outsourcing providers and to rivals of Bank of New York.

The Eagle technology, which also includes investment accounting and performance measurement software, has certainly been thoroughly deployed by Mellon internally. It has built a strategic reference data outsourcing business around the platform (Reference Data Review, October 2005). The data management outsourcing business as a whole, however, has struggled to gain real traction in the marketplace, and how well the Mellon proposition is progressing is not clear.

Overall, the deep pockets of their bank backers have probably served both companies well during a difficult financial period, and in providing services to financial institutions, a class of buyer that tends to be wary of taking solutions from smaller, often less financially sound, technology providers. The loss of that bank parentage would likely be an undesirable outcome for either vendor.
Of all possible outcomes, though, a merger of the two data warehouse vendors could well prove to be the least desirable of all from the perspective of each company’s personnel; the rivalry between Eagle and Netik is well known, and any attempt to splice them together could see sparks fly.

END_OF_DOCUMENT_TOKEN_TO_BE_REPLACED 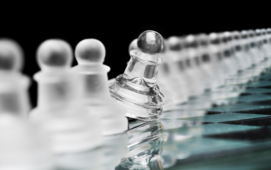