The latest Wall Street movie – ‘Money Never Sleeps’ – opens with Gordon Gekko, the man who so famously stated “Greed is good” in the first film, being released from jail. It’s a comical scene, contrasting the technology of the ’80s to the tech of today as the guard returns Gekko’s bulky mobile phone.

But it’s not just the then-brick-sized mobile phones that have changed since the 1987 instalment. Gekko is released into a world where the nature of how the financial world is run has completely changed. It’s only after recently revisiting the original movie, however, that I came to realise just how much advances in technology have fundamentally changed the way in which the trading floor environment operates.

Take High frequency trading (HFT), the use of technology to monitor and submit orders to markets extremely quickly, which has been receiving a lot of bad press recently and is sometimes described as “abusive”. It is no more abusive than two traders making trades using only the telephone, as was the case in a scene from the original Wall Street film. Yes, it can be used for rogue trading by the likes of Gekko, but so can any other technology.

Similarly, algorithmic trading is also seen by some as an industry curse. Credit Suisse has been fined this year by an exchange after its algorithmic trading system went out of control and bombarded the exchange with hundreds of thousands of erroneous orders. But this wasn’t a deliberate attempt to manipulate the market. It was a mistake, albeit a careless one. There just weren’t proper controls in place to protect the market from what, ultimately, was human error – the algorithms hadn’t been tested sufficiently.

There is no doubting that technology has generated enormous benefits for trading – greater efficiencies, more market liquidity, tighter spreads and better prices for all. To lose these benefits because of perception would be very dangerous. Having said this, technology has also made the markets faster and more complex. Therefore, all market participants need to up their game by deploying modern monitoring capabilities to spot trading anomalies to help capture the next-generation Gekkos.

END_OF_DOCUMENT_TOKEN_TO_BE_REPLACED 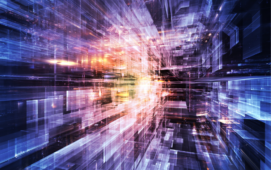 Colt Completes Proof of Concept for Multicast Data in the Cloud

In a further indication of the industry’s interest in finding ways to utilise the cloud for distribution of market data, connectivity and colocation provider Colt Technology Services has announced the successful completion of a cloud colocation Proof of Concept (PoC), demonstrating the viability of hosting and distributing multicast data in the cloud. According to the...