If you think Angela Merkel had a tough time convincing the German public to bail out Greece, think what she’s facing as she prepares to tell them that their beloved Xetra trading platform is relocating to a former Ford car park in Basildon, a desolate corner of Southeast Essex. For that is what almost certainly will happen if NYSE Euronext’s stated plan to acquire Deutsche Boerse goes ahead.

Yesterday’s statement late in the European day – outlining a merger that would create a Netherlands-based entity majority owned by Deutsche Boerse shareholders but almost certainly to be ‘run’ by NYSE Euronext management – capped a busy 24 hours for those interested in the exchange sector. Just hours earlier, the London Stock Exchange announced to much fanfare a “merger of equals” with TMX Group, operator of the Toronto Stock Exchange and other Canadian markets.

The LSE/TMX deal touted the combined group’s financial strength and the opportunity for proliferation through technology services (the recent deal with the, erm, Mongolian Stock Exchange was cited by the mainstream press). But the NYSE/Deutsche Boerse news – sparked by reports that trading in both entities’ shares had been suspended – that merger talks had reached an advanced stage, took some of the wind out of the sails of the LSE/TMX ‘Commonwealth Exchange’ announcement.

Part of the reason for that is a NYSE/Deutsche Boerse transaction would have significant ramifications, particular for market practitioners in Europe. First up, according to figures published yesterday by the Financial Information Forum (FIF), the combination of NYSE Euronext and Deutsche Boerse would create a single exchange entity with market share of 25% in terms of notional value of trades in January 2011.

The combined entity would overtake the LSE on those terms, which currently sits at 21% of European market share, with an additional 3% from Turquoise, bringing it to 24% overall. Meanwhile, according to FIF figures, the Bats/Chi-X Europe tie-in would result in a combined 15% market share.

That outcome would point to a reconsolidation of the European marketplace post-MiFID, a defragmentation if you like. Is it what the framers had in mind? We’ve long argued that this would be the outcome, and it’s far from clear what this landscape would mean for the host of MTF upstarts that sit outside of this core group of three liquidity centres. It will doubtless all come out in the wash.

But set aside the big-picture fragmentation market share analysis for a moment. What does this mean for those of us who worry about where to put our execution servers? Though nothing – really, nothing – is set in stone, it’s hard to believe that Deutsche Boerse wouldn’t migrate its markets to NYSE Euronext’s Unified Trading Platform (UTP) matching engines, whose hub is at its brand spanking new Liquidity Center in Basildon, Essex, 30 or so miles east of London. Politically speaking, this would be hard for the German public to swallow, and could prove a sticking point.

A solution could be one of Stanley Young’s ‘sub-hub’s’ located in Frankfurt – indeed, NYSE Technologies just signed a deal with Interxion, which has data centre facilities in place there. Xetra moving out of Equinix Frankfurt and into Interxion Frankfurt? We’ll see.

Certainly, Deutsche Boerse has needed a new execution platform for some time, and we’ve remarked at what we’ve perceived as a relative lack of urgency in making that come to pass. Current plans are for a new platform to launch in late 2011; this as NYSE Euronext, Nasdaq OMX and (on-again, off-again) LSE have upgraded their matching engines to attract high frequency trading business. According to early analysis for the A-Team Top 10 exchange matching engines, Deutsche Boerse sits at a lowly 10th, compared with NYSE Euronext’s third placing.

And what of Deutsche Boerse’s other Jewel in the Crown: Eurex? The derivatives market’s fiercest rival is Liffe, itself a Jewel in NYSE Euronext’s crown. Will the two now happily get in bed together, or will there be a forced sale (to the Swiss perhaps?)? Surely this will be one for the regulators to ponder, even if their wider review of the main cash markets consolidation may conclude that an element of defragmentation may be good for markets that a fearful of a local repetition of last May’s ‘Flash Crash’ in the US.

On the periphery, a NYSE Euronext/Deutsche Boerse hook-up offers up some interesting technology possibilities. NYSE Technologies has been hot on its execution gateway offerings, with its Risk Management Gateway (RMG), Common Customer Gateway (CCG) and Market Access Gateway (MAG). It’s pioneered the use of hosted market data services via its SuperFeed service. All could be migrated to Deutsche Boerse’s markets.

On the other side of the fence, Deutsche Boerse has a widely respected Market Data & Analytics group, and his been a pioneer in the use of machine-readable news through its acquisition of Market News International. It’s a lot to think about, and a lot for someone to execute on, if it ever happens. And it may be a low-latency world, but this is all gonna take some time. 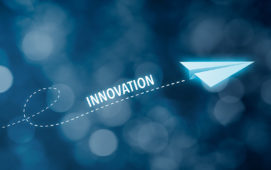 Financial Institutions are going through considerable change as they look to deploy innovative technologies and solutions that could radically change data management processes and deliver operational and business benefits. This webinar will review innovation in data management – including technologies such as machine learning, pattern matching, artificial intelligence and solutions such as utilities and managed...